It doesn't have to be confusing.

We can send you a

Unlike other businesses, farmers rarely hand over the keys to the next generation and walk away. Most of the time, the process is gradual for many reasons. In some respects, walking away would simplify the transition process, but most farmers and farm families don't want it, and I understand why. To many, farming is more than an occupation; it's a heritage.

A gradual transition method is good,

but the boundaries of work, money, and decision-making get fuzzy in a hurry, especially when there are unspoken assumptions.  It doesn't have to be this way. You can create clear boundaries.  It just takes intentional effort.

Transition plans are often stressful because who is "in charge" is changing.

Who actually is in charge?

For how long?   Will they stop being the main decision-maker all at once?  Probably not, but what will they let go of first? Who will take over?  Will their pay stay the same or change?

Creating an Accountability Blueprint solves many of these challenges.

Bring all generations together who have a stake in the transition plan for the meeting.

You'll want to give yourself at least two hours to work through it for the first go at it. Depending on the farm's makeup and size, it sometimes makes sense to include farm managers as well. Several groundrules make the process work well. Make sure everyone understands these rules.

A large 4x8 whiteboard works best, but a large PostIt Note flipchart paper can also work in a pinch.

Across the top, list out all of the main work areas of the farm.

Now it's time to take ONE of the areas and build it out.

Think through a production cycle and build it from start to finish. For example, a first run through the Row Crop part of the Accountability Blueprint may look like this. 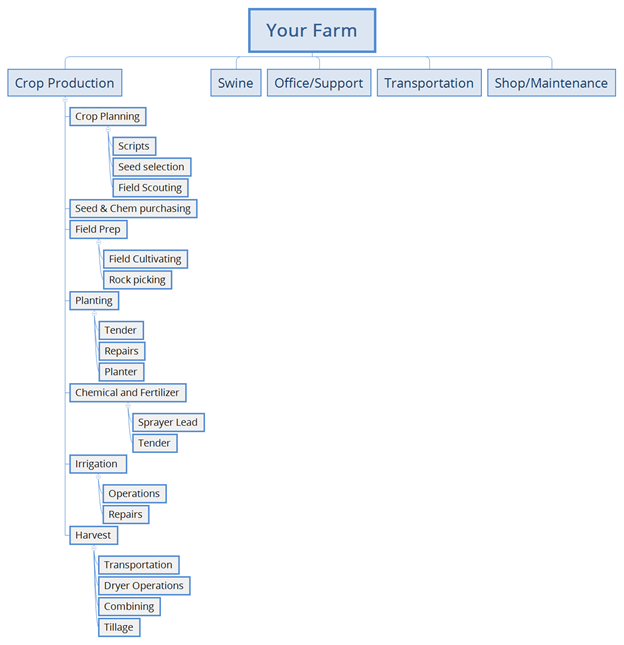 This level of detail is good for now.

Next, go onto the other areas and build them out.

Don't be surprised if there is debate about where to put a work area. For example, whether trucking is significant enough to be a standalone unit or not.

Now, place in the names of actual people.

Only do this AFTER the chart is fully built with the details.

Waiting to put in people's names helps keep possible turf wars or egos from getting in the way.  Whoever has their name on the chart has full responsibility for ensuring that work gets done.

Resist the urge to place more than one name under an area.

Two or more names on any one area allow a lack of commitment and accountability to creep into your farm.

This process helps define gaps in skills or expertise that need to be filled before the next generation takes over.

It also helps the farm understand who really brings value to the operation and who is along for the ride. Taken to the next step, the farm can build out job descriptions and use these areas of responsibility for determining pay, bonuses, and job reviews.

We sometimes see only family members on the chart or one name in many places at once. Think hard about whether that person is holding onto too much work or trying to control too much. It's hard for the next generation to step up if they don't have BOTH the accountability resting on their shoulders as well as the authority to make the decisions.

Notice that in the final rendition,  Bill is at the top with the role we call Integrator.

It's the Integrator's  job to ensure that all of the work areas have what they need to get the work done, everyone is aligned around the vision, and the team leads are effectively communicating.

We've also identified Team Leads, just under the Integrator.  They have broad powers to do their job. A question that we get is, "Does this mean we will not help each other?" Abosultuly not!

What it does mean is that the Team Leads are expected to communicate with the people under them but also with the other work areas such as Swine, Office, and Shop Maintenance.

It means everyone asks for help if they need it, and the Integrator helps keep it all flowing.

Whether the farm is small or large, using an Accountability Blueprint keeps the peace among family and lowers confusion among employees. It also makes sure the work gets done. When the exiting owners can see a way out while still staying involved, that makes for a great start to a transition plan. Be forewarned! This process can have unintended consequences. Sometimes Dad wants his name off the blueprint faster than ever!  But that's a discussion for another time.

Want notified when we have new blog posts?

Our Peer Groups might be a good fit for you.